I am starch, water, and fat

If you are what you eat, then I am bits and scraps and a few pinches of spice. I am stale bread and clearance items, expired cans, rust, and mold. I am starch, water, and fat.

They used to say that no one goes hungry in Damascus, because it’s a generous, lush land. They said the poor are poor because they do not apply themselves. The ever-expanding concrete slums scaling up its hills and mountains continue to prove them wrong. The slum of my childhood was only one among a dozen.

My father was a chef for over twenty years; he didn’t receive any formal training and was working before a stable Internet came to Syria. He worked fourteen hours a day; he fed presidents and diplomatic missions, he fed landlords and warlords before the war. For a while, he fed this poor child with the leftovers of the restaurant he worked at. Beef Stroganoff, two-meat meatloaf rolls, caper cream sauce chicken, and meat and potato gratin filled our freezer for a few years. I would watch endless hours of Fatafeat, the satellite food channel, imagining Father in each chef’s stead. But Father died young and left behind debts large enough to render us bankrupt within a few months. Nearly overnight, this child became a small, hungry adult. My being poor was the fuel to my curiosity; hunger and inquisitiveness imitated each other often. Both insatiable and indifferent to source and quantity, so long as they were constantly fed. I was poor in my soul, and I couldn’t get enough. My stomach waited, churning. I knew what the world had to offer, what expenditures people afford to stuff their stomachs and fluff their tongues, and it was all kept at a distance.

In the years that counted, Mother and I sold our couches, chandeliers, and closets to score a meal. One portion at a time, we emptied our house to fill our stomachs. Every meal was blasphemy. Gaping pockets devour cultures. We dipped dry bread in water and counted pruned old olives. Tomato paste cost triple, so spaghetti married ketchup. Heavy cream cost quadruple, so fresh yogurt and garlic made a poor man’s white sauce. With nothing to side with, mayonnaise promoted itself from a condiment to a spread, sporting garlic in its folds. Half a kilo of hummus sufficed for a few days. Hot became a flavor, and texture substituted for the rest, so a different arrangement of the same thing could yield the illusion of variety. So many potatoes made my sweat so starchy and sweet. Mash them, fry them, bake them, boil them, you could only have them in so many ways for so many days in a row. Fried vermicelli and sugar syrup make a sad dessert. Starch, starch, starch. Starch, water, and fat make sustenance, but not food.

With electricity out for so long at a time, mold became a permanent resident in our apartment, and we fought it for food. Cut around it, wash it off, or convince yourself that it carries the flavour profile of discount Roquefort, mold was there to stay. It lingered in the walls, behind the coagulated amber droplets of oil. The kitchen smelled damp and rancid, only late-night coffee or the odd curry overpowered it.

Like other urban poor, I developed a taste for the latent hints of urine in scorched kidneys, for the tooth-grinding iron taste of freshly cooked liver blood, and the roundedness of slow-cooked, stuffed intestines, all cut with copious amounts of cumin and citric acid. Every day I silenced my stomach, but never could I silence the churning in my soul. Happy were the days with cuts of meat, as a feast of chicken or cutlets would wash away the burdens of the day. A simple rotisserie chicken was a delight to all the senses; a few slices of veal with sufficient lemon juice and garlic was divine. To a poor soul, eating these felt less like devouring sustenance and more like partaking in sacred flesh.

In the limbo that is applying for asylum in the gloomy border town of Eisenhüttenstadt, food was not always as scarce, but never as good. The same went for other camps in Potsdam. We were given portions of moldy rice that smelled like trench feet and a dubious-tasting red sauce that was too thin to hold on to itself. I had eaten mold before, but that mold had been my flatmate. I knew where it came from, I knew whose negligence let it grow and the circumstances thereof. The mold in the portions was as foreign to me as I was to the land, so I ate what I knew—nothing.

After a few weeks of transfers, I spent the longest time outside a small town called Doberlug-Kirchhain in the south of Brandenburg. There, successful lobbying gave the old soldier barracks a facelift and made it a refugee shelter. Every Tuesday, the soldiers in the surrounding barracks practice shooting their rifles, and helicopters often fly low nearby. A catering company meant that food was served on a monthly schedule, but it was fresh and varied every day. There I rediscovered my taste for cheese and cold cuts, bread and jam and a hot cup of tea, served at two meals every day. Dinner, as per German customs, starts at six in the evening and lasts until half past seven. Around eleven or so, everyone would get peckish again, and the feasts of chips and chain smoking would begin. Those who could muster some German would ask the security personnel to unlock the small Teeküche for some scrambled eggs or french fries. Cigarettes did the trick for me, as well as the occasional closet stash of home-made cookies that a friend would give me after every visit to Berlin. Napkins, cigarette tubes, jam and chocolate packets, and homemade cookies filled the top shelf of my closet. Six months passed.

Then there were camps that expected us to cook; the over-inflated bubble hall in the small airport of Trebbin, the even smaller three-floor container camp of Hennickendorf in Nuthe-Urstromtal, and the apartment without a single surface or cupboard in Luckenwalde, all in deep Brandenburg. They took away moldy food and substituted it for money, though the facilities at the camps did not actually facilitate anything. There, too, foreign amber oil and several layers of soot adorn the walls, water drips from every pipe and goes nowhere when it falls on the laminate floors. In the newly opened long-term residence hall in Trebbin, I received my first installment of the full Sozialhilfe with the hundred or so others that I was transferred with. Over the next few days, social workers would drive six of us at a time from the airport into town to buy groceries from Lidl. Everyone fried their fries and boiled their rice, I made cheese sandwiches and cups of tea. I was transferred again, this time just outside a town of a dozen houses called Hennickendorf. I started eating like a small child whose parents are away for a few hours.

I owned one bowl and was allowed an electric kettle and a small fridge in my room, so I consumed industrial amounts of knock-off cereals and instant noodles, Gouda, and all manner of Wurst. I drank massive amounts of milk and hot chocolate. Every two days I walked to the nearby Thomas Philipps, down a small hill and across a two-kilometer field full of horses and cows, keeping within the path cleared of mines. In the adjacent forest, I often saw military personnel in bomb suits using metal detectors. I would haul kilos of the same things, greeting the horses each time. The same routine continued when I got an apartment in Luckenwalde. Again at the edge of town, across from a goat farm. This time I had no fridge, kitchen sink, countertop, nor bowl. The town’s Aldi was a couple of kilometers away, and they saw me often. Bread, Gouda, salami, and a cup of hot tea continue to be the sustenance of my lonesome self, when I am unable to crave and unable to enjoy. The food of limbo, so to speak.

But I can finally step out of limbo. I can eat to enjoy myself and cook to spoil my loved ones. 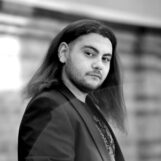